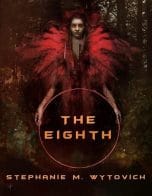 The Eighth, by Stephanie M. Wytovich chronicles the epic journey of Paimon, a collector of souls.  The tale opens with a provocative statement that offers readers a clear preview of what is to come.

“Paimon set himself on fire.”

Roasting in a burning chamber, this soul collector punishes himself for the deeds he is forced to commit by his taskmaster, the devil.  Paimon is an extraordinary sort of demon.

The soul collector resides in a hellacious monastery deep in the bowels of the inferno.  There he suffers guilt for his sins and awaits orders that will send him back to the living world where Paimon’s most searing agony awaits to torment him—memories of Marissa, his former wife.  Haunted by their long spent love, even after death, he still wears his wedding ring, even though it “sears a bloody circle around his finger.”

Paimon soon gets marching orders;  the devil needs another soul.  His next victim will be Rhea Harmon, a troubled earthling.  Impelled to do his duty, Paimon’s locates his target.  One glance at Rhea compels him to reexamine his allegiance to the devil—a very dangerous notion.  Paimon is love.  To preserve a miniscule possibility of happiness, he leads readers on a dangerous quest aided by another citizen of hell, Arazel.

The major settings of The Eighth are in and near hell.  Enhanced by the author’s poetic use of language, the descriptions offer a clear picture of a twisted, strangely believable dimension committed to hate, lust, and pain, with little or no hope of redemption.

Four main characters take turns competing for the reader’s attention.  The devil is drawn as a salacious, Machiavellian ruler who manipulates his minions in a heartless plan, an ever-evolving game.  Arazel is Paimon’s true and unappreciated friend and protector.  Rhea is a love-struck, psychotic earthling, living a tortured, ill-fated existence.  And Paimon suffers from emotions he cannot master.  The interaction of these four distinctive characters creates multiple connections, interwoven temptations, and remarkable conflicts.

The plot is a highly complex, lyrical quest journey reminiscent of Dante.  The action bounces back and forth between the world of the real and other dimensions, all enhanced by lush descriptions and exacting details that include examinations of the character’s inner conflicts.

The literary quality is perhaps the most preeminent element of this work.  Wytovich’s poetic skills are made evident in her luscious style laced with a brilliant use of imagery.  She describes each scene, action, and inner reflection in vivid, exacting detail.  However, this lush prose later tends to hinder the plot by overwhelming the story repeated elements, thus slowing down the pace.  However, readers who crave Boschian visuals will linger over every horrific moment.

The Eighth is a daring combination of action, quest, and verse.  Readers who yearn for leisured, painterly journeys will adore the novel.  It is not focused on gratuitous violence, but many of the visuals are gruesome.  The Eighth is a tale that creates a mood that will wash over the reader and seep into his soul.

The Eighth is a daring combination of action, quest, and verse. 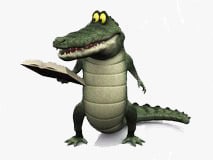