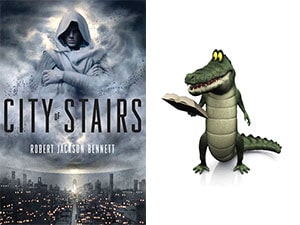 “We now find ourselves at a turning point in history….” Olvos.

City of Stairs by Robert Jackson Bennett creates a magical, mind-bending experience by depicting a world that haunts readers with disconcerting feelings of déjà vu.   This world is unique, unearthly, but somehow strangely familiar.  It is not until near the end of the story that the reason for this familiarity will reveal itself to discerning readers.  City of Stairs is not simply a fantasy; it is a veiled commentary on the history of humanity and the circular relationship between people and their gods.

The story begins in medias res and tracks the journey of protagonist Sara Komayed as she travels to a “continent” comprised of countries that bear names ending with the Persian suffix “stan.”  This is not a coincidence.  Neither is the fact that this continent was once created and ruled by six deities that may very well reflect the six major religions and deities of our own world.  Shara is assigned the task of solving the murder of a professor whose focus was the history of religion, an outlawed topic.   This plot element melds fantasy with detection, which is perfectly acceptable in this age of postmodernism.  The author also inserts copious amounts of intertextuality, another element of postmodernism that makes the read more interesting and propels the plot. The detection elements are handled very well.  At the end, readers will agree that all the clues necessary to solve the crime have been carefully planted throughout the novel.  Even so, few will guess the identity and motive of the killer.

As with most tales of fantasy worlds, the beginning of the read is a bit arduous.  Registering the names of locations and characters takes concentration, but this is the nature of the genre, and its aficionados are prepared for the task.  Another challenge is the fact that the author chose to write in the present tense.  However, once readers become acclimated the present tense, they will appreciate the immediacy it produces.  In addition, Mr. Bennett has a great hand with description.  He draws vivid pictures of the settings and actions.  A master of style, he also bends a few arbitrary literary rules in order to provide a more pleasant read.   His intricate combination of the elements of alchemy, magic, the supernatural, and reality is brilliant.

The characters are diverse, interesting, and likable.  Readers will no doubt end up caring for more than one of them.   Shara is not drawn as particularly attractive.  Instead, she is smart, intuitive, strong, and possibly more…. Her sidekick Sigrud is described as a North-man who elicits memories of Beowulf.  Readers also get to meet Vohanes, Shara’s first love.  There is even a sea creature that echoes Lovecraft.  Perhaps the most interesting players are the deities who are diverse, long-dead mysteries who have left behind a reverberating trail of supernatural events.

City of Stairs is more than fiction and more than a higher octave of fantasy.  Subliminal comments on colonialism, terrorism, and the choices made by civilizations urge readers to reconsider their beliefs.  Perhaps the most important question posed by the novel is whether or not we create our own monsters.  This question may very well urge readers to revisit our shared histories and reconsider our shared futures.

A magical, mind-bending experience by depicting a world that haunts readers with disconcerting feelings of déjà vu.