A Fever in the Blood by Oscar de Muriel could have been great. 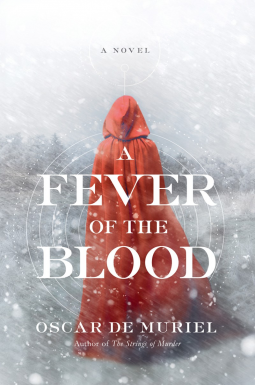 As far as plot goes, A Fever in the Blood does not blaze new ground.  However, the author does have the laudable ability to create an extended, convoluted, unpredictable plot trajectory.  Issues that might at first seem troubling are all tied up in the end.  Most of the characters are interesting and engaging, especially the antagonist.

The two main characters perpetuate the good-cop, bad-cop trope.  Although it has been done before, readers still enjoy it.  The first-person narrator is Frey, an English police officer working in Scotland.  His side-kick is Nine-Nails McGray.  Frey is a solid, serious man who tries to follow the rules.  He is believable and likable.  McGray, on the other hand, is an unruly Scott. His characterization is rather overblown.  His erratic behavior and dialogue tinged with unfortunate dialect make him hard to appreciate.  In addition, randomly referring him with one name in one sentence, then the other in a consecutive sentence is confusing and slows the read.  His metaphors and similes make him sound unintelligent.

The opening setting is Scotland.  Unfortunately, there is little sense of place in this part of the novel. Salting the text with a “laddie” here and a “lassie” there does not create place.  When the plot moves on to England, the sense of place improves greatly.  Readers will be able to picture England of 1882 from madhouse to inns.

The tale begins when McGray and Frey are called to solve a murder that takes place in a mental institution.  The perpetrator, a lord, has escaped into the darkness.  The police follow his trail to England where they are hampered by the machinations of witches, locals who lie in an effort to derail their investigation, and massive snow storms.  All this creates an interesting story that some readers will enjoy.

Unfortunately, refined readers will find A Fever in the Blood a painful reading experience.  The text is littered with cumbersome adverbial dialogue tags that should be shown and not told in order to add depth to the story.  In addition, animalistic tags such as growled, barked, spit, and roared are highly objectionable.  Garbled participles, improbable metaphors, and excessive passive constructions are among issues that derail the narrative.  Most importantly, dialect must be used minimally and with stringent accuracy.  To do otherwise can be insulting to native speakers.

Fortunately, the writer possesses an innate ability to create an interesting plot.  Once his literary skills mature, he will likely become a favorite for readers of his chosen genre.