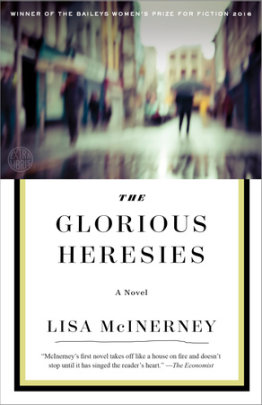 The Glorious Heresies by Lisa McInerney whispers in a reader’s ear then lures him through a brash linguistic tour of the dark side of an Irish community, a place that mirrors the dark side of just about every community.  This highly original text reveals evil deeds, twisted passions, and prophetic back stories, all portrayed with skill, humor, and absolute honesty.

All the major characters are prostitutes, drug addicts, alcoholics, drug dealers, scammers, psychopaths, and even murderers.   Although these sorts of actors are generally drawn within ridged, superficial boundaries, McInerey unmasks these archetypical individuals and drills down to their cores, revealing their true natures, mixed motivations, and unique codes of conduct.  A monstrous character is driven by a need to house and protect a mother who deserted him at birth.  An alcoholic parent murders a person who abused a child.  A prostitute clings to a symbol of her mother’s faith.  Every character has at least one redeeming aspect, which urges readers to turn the next page, longing to see him survive.  The characters are real, poignant, trapped.

One theme that haunts the entire novel is the way society often treats “fallen” women who conceive a child out of wedlock.  McInerney reminds readers how these women were harshly demonized in the past and comments on the fact that within certain communities nothing has changed.  Women deemed as unworthy still lose their children.

The plot is complex and convoluted.   Scenes changes, at first glance, appear randomly placed.  However, they all begin to make sense when one realizes how the lives of the characters cross paths, interact, mirror each other.

The text is truly high literature.  McInerney manages to make dirty street language sound like art.  She holds no punches when it comes to drawing exacting versions of street language.  Her metaphors are phenomenal and fitting with the nature of the text.  “She had hair dark as outer space…”  Each character speaks with a unique voice, which is hard to do with such a large cast.

Due to the intensity of McInterney’s style, The Glorious Heresies may not be a good choice for a summer beach read.  The text is a storm of dialect which is almost impossible to understand without a Google search.  Many chapters begin with he and she, leaving readers to wonder who the characters are for a page or so, which can be frustrating.  However, enlightened readers will revel in the density of the text and will willingly delve into an artful, voyeuristic vision of an alternate world that is unfortunately so very real.

Readers will revel in the density of the text and will willingly delve into an artful, voyeuristic vision of an alternate world that is unfortunately so very real.