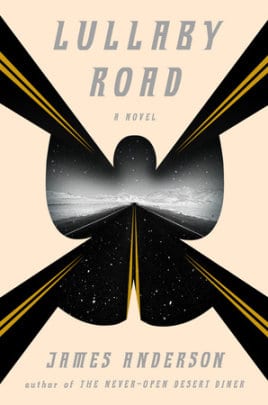 Lullaby Road by James Anderson is a hypnotic, mystical, tale of mystery quickened by murmurs of the transcendental in the form of Los Ojos Negros.

The protagonist Ben Jones is a quixotic hero who runs a one-man trucking business, delivering to Utah desert locations so dangerously remote that other companies refuse to service them. Sequestered in the cab of his truck, hunkered in his safe place, Ben rumbles from one insular location to another and introduces readers to a conglomeration of idiosyncratic inhabitants who live along Route 117.  Each of them is a misanthropic work of art, most hiding from haunting backstories.  Like the inhabitants of the desert, Ben is an imperfect character with an ill-stared past.  However, he radiates warmth, bravery, and honor. He always tries to do the right thing, but sometimes makes fated, unfortunate choices.

The mystery begins when Ben is forced to take possession of a small, nameless, silent girl, thus thrusting him on a treacherous journey that could easily end with his death.

The otherworldly Utah desert is the setting for this remarkable novel.  Jones is a master of illustration.  His narrative is so painterly that when the wind kicks up, readers will feel sand on their teeth and shiver with the cold.  In addition to highlighting the dangers, Jones never forgets to include poetic portrayal of the stark beauty of the desert, creating a unexpected, discordant unity.  The various dessert rats Ben interacts with are just as contradictory as is the setting.  They all seem to be hiding from or attempting to forget lamentable histories. Some are silent, some are odd, and some are dangerous.

The author’s style, arguably the most laudable aspect of the novel, is lyrical, intelligent, and easy to read.  The first-person perspective of the narration allows total access into Ben’s mind, exposing his innermost thoughts, revealing a compelling philosophical analysis of human nature.  Even the expert truck driving operations appear to act as tropes that comment on choices and other aspects of life.  The facet of author’s style that differentiates Lullaby Road from others is his striking ability to interject hilarious, wry humor into just about every situation no matter how grim or grave.

The complex plot is studied, careful, and leisured.  Lullaby Road is not a fast-paced novel.  Instead, it could be said that the author privileges the characters over plot.  Every individual comes alive upon meticulous, sympathetic description.  This makes perfect sense since every character is an integral building block of the plot and narrative.  Their stories become intertwined subplots that create labyrinthine tales of sadness and regret and quests for redemption.

Although Lullaby Road is the second of a series, it can be read and enjoyed as a standalone. The author includes enough backstory to allow readers to understand Ben’s past.  However, most readers of Lullaby Road will opt to add The Never Open Desert Diner to the top of their reading wish list.

Lullaby Road is highly recommended.  Readers will no doubt hope that there will be a third addition to the series.

Jump into the cab next to Ben, share a taco, and go on a treacherous, spiritual ride through the Utah desert.

Jump into the cab next to Ben, share a taco, and go on a treacherous, spiritual ride through the Utah desert.